The following article was written from an interview with Cindy Hall, whose husband Tommy Hall was diagnosed with stage IV lung cancer in 2013. After enrolling in an immunotherapy clinical trial, Tommy is now out of treatment and living life to the fullest.

Living on the coast in Suffolk, Virginia, Tommy and Cindy Hall both had good jobs and were enjoying life to the fullest. Cindy was Director of Sales at Sysco Foods. Tommy tested engine products and parts for boats.

“Tommy had just started his dream job,” says Cindy. “He basically ran boats up and down the Nansemond River for six or seven hours a day. Great job!”

A lump in Tommy's neck

Cindy signed up for a massage package at Spa Envy to help relieve stress. She also signed Tommy up. The perceptive masseuse noticed a lump in Tommy’s neck. Tommy wasn’t worried about it, though because he had a history of sebaceous cysts.

“He said he felt like that’s what it was, 100 percent,” Cindy recalls. “We actually went for a massage not even two weeks later. The massage therapist came in and said, ‘It has changed. I think you should have it looked at.’

Cindy told Dr. Dena Hall that she thought it could be serious.

“I think it could be cancer,” she told the doctor.

“I hope that’s not accurate,” Cindy recalls Dr. Hall saying. “We’ll run a couple of tests to try and eliminate your fears and confirm what Tommy thinks it is.”

When the results from the tests came in, the doctor asked Tommy to come in.

“She said she didn’t have anything conclusive but there were some concerning things in the CAT scan and in the tests that they did. She wanted to refer us to an oncologist and to get a biopsy. This was all in a week and a half.

The doctor referred them to an oncologist who did a biopsy, which confirmed the doctor’s suspicions. Tommy was diagnosed with stage IV Non-Small Cell Lung Cancer. 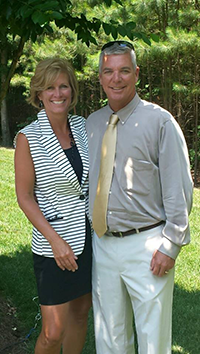 “That was five years ago this week that all this went down,” says Cindy. “We had asked to be put with a direct oncologist. He was direct. It was in both lungs and in multiple lymph nodes. The way the disease had progressed, asymptomatic, was an indication that it was very aggressive. He said that typically people with that kind of diagnosis, because it was inoperable and Tommy had multiple tumors in both lungs, couldn’t do radiation. The only option was chemo.”

The doctor advised them that with chemotherapy, which could extend his life three to six months, Tommy would survive up to one year.

Read the continuation of "Couple Celebrates Gift of Life After a Stage IV Lung Cancer Diagnosis" in Part II here.

Building a Support Network When You are a Single Person with Lung Cancer: An Interview with Karen Loss