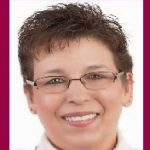 I was diagnosed with Stage IIIb Adenocarcinoma on April 18, 2014. This is the official date but my journey actually started on February 20, 2014.

Approximately mid January 2014, I started waking up every night with a fever of 102 or higher. I felt absolutely fine otherwise. I was working full time, writing part time and continued my usual activities. On February 17, 2014, I went to take my Tylenol and realized I had gone through a huge bottle in a small amount of time. I still felt fine but knew the daily fever was not right. I immediately made an appointment with my PCP. With no other symptoms, I am sure they thought I was crazy but they did the normal workup – bloodwork, chest x-ray, etc. Four spots were seen on my lungs. I was admitted to the hospital for 10 days and told I had lung cancer where I went through every test imaginable – CT scan, MRI, Bronchoscopy and more. On March 4, 2014, we determined it was not cancer but a Lung Abscess in 4 lobes and would be going home with a PICC Line on heavy duty antibiotics.

Six weeks later, I had a CT Scan to view the progress we had made with the antibiotics. The two right lobes were clear. The two left lobes had gotten larger.

On April 18, 2014 a needle biopsy confirmed my upper and lower left lobes had lung cancer. After more tests for Staging purposes, I had a pneumonectomy of May 28, 2014. Both Left Lobes of my lungs were surgically removed. This begins my true Lung Cancer journey.

July 2014 I began chemotherapy. I faithfully went every 3 weeks for 6 months only to find out the cancer had spread to my lymph nodes in my chest. We agreed to continue chemotherapy and change the medication. In November 2015, we found another spot in my right lung. Welcome to Stage IV Lung Cancer.

January 2016 we all agreed to try Immunotherapy – Opdivo. My prayers have been answered. Since then I received the infusion every 2 weeks and scans every 3 months. Thankfully, each scan has showed a small reduction in the tumors.

Lung Cancer is miserable. It sucks everything from you. The bad days, at times, outnumbered the good days. BUT, without this diagnosis, I wouldn’t have developed a new positive attitude everyday. I walk around each day with tumors in my lymph nodes and right upper lung BUT I’m alive – my treatment is working – I advocate for lung cancer patients daily – I advocate for more research and education about Lung Cancer – I mentor newly diagnosed patients to help them get past the hard times. I spend my time with my 7 grown children enjoying each minute and every second.

As a Lung Cancer patient, advocate, writer and mother, I spend each day looking at the positive. It has been 3 years and 1 month since I first went to the doctor. I am committed to making the best of each day and helping anyone along the way.