This is the continuation of A Tale of Two Trials, where Melissa shares her experience with the Loxo-292 clinical trial to treat her stage IV lung cancer.

“Pharmaceutical companies want participants in their clinical trial,” she says, “but it becomes cost prohibitive for most people if they have to travel. Either pay for patients to come to where the trial is or take the trial to the patient somehow. That’s the way I see it.”

Searching for other options

“Now that I’ve been on this trial, I am going to be expecting this same treatment.”

Melissa researched the nation’s leading oncologists for treatment. But even with the top-notch care, sometimes advanced stage lung cancer patients run out of treatment options. One clinical trial Melissa entered was for alectinib, before it was FDA approved for the ALK-positive biomarker. 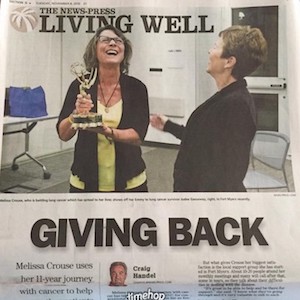 “We were kind of at our wits ends as to where to go next,” says Melissa “Dr. Alice Shaw allowed me to take alectinib, which didn’t really work for me, but it was something. Some of the other ‘tinibs’ I’ve been on have been very harsh.”

Some of the drugs Melissa has been on never received FDA approval.

“In other trials, I had to pay for the flight, the cab, the hotel, when I went to Mass General.”

In one trial, the drug was mailed to Melissa, so she only had to travel to Boston once every three months.

“But it was a horrid, horrid drug,” with severe side effects, she says. “I think it’s very important to participate in clinical trials,” says Melissa. “I’m very fortunate to have this company pay for everything for me. I know other people can’t even get their parking ticket validated.

“I would at least ask if some of the cost — if not all of the cost — could be paid for by the company,” she suggests. “But the bottom line is, you know, it’s your life — or not. So, you’re kind of between a rock and a hard place.”

Melissa understands that some people have misconceptions about clinical trials.

“There are some people who just aren’t interested in clinical trials,” she says, “because they perceive them as experimental — which they are. They don’t understand that you’re getting at least the standard of care in a clinical trial. It’s not as if you are getting a placebo.”

Many promising clinical trials fail — not necessarily because the drug was unsuccessful — but due to failure to recruit the targeted number of patients. Building the patient cost into the overall cost of the trial would go a long way in recruiting patients, especially advanced lung cancer patients who are no longer able to work.

The value of the patient-centered model 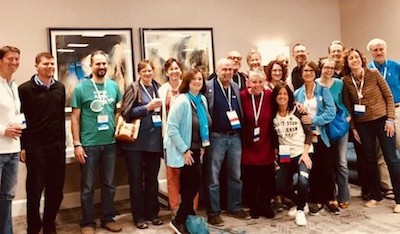 “It all comes down to the pharmaceutical companies,” Melissa says. “If they want people to participate, then they have to help that person bear the cost of what’s involved. If Loxo, which was a very small, relatively new pharmaceutical company, if they can do this, surely the big pharma can do it. Now, Lilly recently acquired Loxo, but as far as my costs being covered, that hasn’t changed.”

When it comes to clinical trials, there are really just two kinds. One clinical trial truly is patient-centered. The other only claims to be.

Read Part I of A Tale of Two Trials.