A Tale of Two Trials 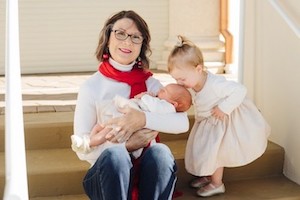 In August 2005, Melissa Crouse of Cape Coral, Florida, was shocked by her lung cancer diagnosis. She had just relocated to Florida from Pennsylvania after accepting a new teaching position.

“It was an accidental finding,” says Melissa. “I had to have a physical. I had been coughing a little bit. So the doctor did a chest X-ray for my tuberculosis test. They discovered a lump in my upper left lobe.”

Deciding on a clinical trial

Melissa had a lobectomy to remove that lobe, followed by chemotherapy, which included carboplatin and taxol, the standard lung cancer treatment at that time.

“My tumor was sent off for testing,” she adds, “but just for EGFR. I believe that was the only biomarker they were testing for then.”

After her treatment, Melissa had no evidence of disease for two years.

“It was discovered in 2008 that my cancer had metastasized to my liver, where it remains to this day,” she says. “I have been on every treatment you can imagine, including six clinical trials.

“That’s why I’m still here,” says Melissa. “I’m still alive because of clinical trials. Because I ran out of options a long time ago. When there aren’t any options left, you either enroll in a clinical trial -- if you can get accepted -- or you don’t.”

Finding success with the Loxo-292 trial

Melissa says the trial she is currently in -- Loxo292 -- is by far the best yet.* The Loxo292 trial is designed to target the RET biomarker, Melissa says. The RET biomarker is rare; less than 2 percent of lung cancer patients have it. However, RET also shows up in other types of cancer, such as certain thyroid cancers.

Melissa says that for many reasons the Loxo-292 trial is her best trial.

“Number one...it’s working,” she says. “There’s been a decrease of more than 50 percent in my targeted tumor in my liver. I’m still not cancer free. But overall, the tumors are shrinking slowly but surely. Some people have had a much faster response. I know of a patient on this trial that’s NED (No Evidence of Disease) right now. I also know of a patient who had progression.”

Melissa has been on the Loxo-292 trial for about two years.

“I am responding, but slowly,” she says. “Also, the nice thing about this trial is that there aren’t any horrific side effects, except overwhelming fatigue to the point where you just don’t want to get out of bed. But a doctor prescribed some medication that’s really helpful with my energy level. That seems to be working. So, all in all, I’m doing well, and the doctor is pleased with my progress. Hopefully, it will continue.”

A patient-centered approach to trial design

But another significant reason the Loxo-292 trial is Melissa favorite is the patient-centered trial design.

The Loxo-292 trial covers patients’ direct expenses related to the trial. Melissa flies monthly from Florida to Memorial Sloan Kettering in New York. She uses a prepaid credit card to pay for her parking, taxi fares, and food.

“I get a cab at the airport that takes me to the hotel,” she says, “which is a block from the cancer center on 53rd Street. They load money on it that I can use as I choose. I don’t eat that much so I am not spending a lot on food. I even have used it to kennel my dog when I travel to the trial.”

Loxo-292 trial deposits $300 for each trip Melissa makes. Any unused funds roll over.

“I’ve accumulated $600 on that card,” she says. “The other clinical trials I’ve been on, I had to bear the cost of travel and lodging. That was a hardship for me, but I was working at the time, so it was doable.”

Due to her lung cancer, Melissa is no longer teaching. 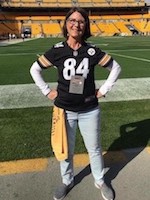 *It is beyond the scope of this article to delve into the medical merits of the Loxo-292 drug. The focus of this article is to illustrate the truly patient-centered model of this clinical trial and its inclusive trial design that significantly reduces financial toxicity to patients enrolled in this trial. For information about the Loxo-292 trial see the article published September 23, 2018, at the International Association for the Study of Lung Cancer World Conference on Lung Cancer: Loxo-292 study.

Read Part II of A Tale of Two Trials.

Why I Choose To Work

My Experience with Liquid Biopsies