June 25th, 2022 was my 7th cancerversary. I was very emotional and wanted to write down my feeling, but I didn’t know where to start. Until one day, I saw a drawing on my sister-in-law’s house done by my niece 20 years ago when she was a high-school student. The drawing caught my attention and somehow reflected my lung cancer journey, especially now.

Snakes took over the castle!

The drawing is a kind of contemporary piece, as shown. However, when I first lay my eyes on the sneaks tangled in a seemingly magnificent castle, it triggered me that the seven years of my lung cancer journey reappeared in front of my eyes. 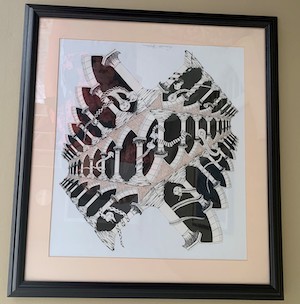 The sophisticated imaginary castle was like my life before my lung cancer journey, magnificent and strong, yet sophisticated and diverse. However, as I had lung cancer, the cancer cells, like snakes, took over the control of my body and life. Although the castle columns were still standing tall as I’m today, the pitch-black dead space between the columns indicated snakes had consumed everything.

I never want my life to associate with snakes since snakes are poisonous and horrible. Also, in Chinese culture, dragons, imaginary creatures based on snakes, have superior power, and defeating the dragons is almost unheard of.

This painting vividly reflects my lung cancer journal, especially for the first three years. I had a challenging diagnosis and had to stay in the emergency room for 15 days. Also, I took all the standard treatments I could, such as chemo, radiation, radiosurgery and targeted therapy, and informal treatment, like Chinese medicines. I put all possible poison drugs in my body, did countless blood work, and had many CT and MRI scans. But, in the end, the snakes still captured the castle after I lost the battles.

I stared at the drawing further, and the smiling faces of the snakes gradually attracted all my attention. Though snakes with ugly faces firmly grasped the columns, the snakes somewhat smiled innocent and danced beautifully and gracefully (I couldn’t believe I used such words to these monsters.) Their long bodies elegantly twined to the columns, which showed the snakes didn’t rush to go anywhere. The castle still stood there; there seemed to be no sign that it would collapse.

That’s how I feel now. After three years of battle with lung cancer, unfortunately, I didn’t win the war, i.e., my lung cancer was under control but wasn’t cured. Now, it’s the time to re-evaluate, re-think and re-strategize the situation. My lung cancer has been stable for four years, and I was gradually used to the idea of co-existing with lung cancer. Therefore, I only expect that my lung cancer is under control, i.e., the snakes will collaborate and stay in their territory.

Although the targeted therapy is effective for me now, I’ll develop resistance, and my lung cancer will progress someday. I can only hope that my cancer doesn’t grow resistant soon and the cancer researchers will develop more drugs to control the resistance, i.e., the snakes and the castle can still co-exist peacefully.

The drawing is very dark for me, but in the end, I make peace with myself and my cancer cells. I co-exist with cancer! In addition, I can’t eliminate the lifeless and depressing feeling of the pitch-black space between the castle columns. It was genuinely reflective of my emotion for the first three years when I struggled for my life, but in the past four years after my cancer was inhabited, I regained control of my life. Advocacy for cancer research is a big part of my life. In addition, I travel to different places, visit museums and art galleries, and experience different cultures and cuisines. So I joked with my niece that I would paint new colors like a rainbow in the space between the columns.

The only possible way to keep the co-existence with lung cancer is through RESEARCH, RESEARCH, and RESEARCH. Until one day, we develop effective therapies to conquer lung cancer and any cancer.

I’m seven years survivor of lung cancer, and I’m prepared to Dance with Cancer for a long time.

Do you considered yourself to be a well-informed lung cancer patient?