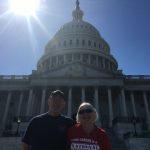 As LCAM comes to an end I need to make a confession and apology. I firmly believe the destructive stigma associated with a diagnosis of lung cancer must be eliminated. I had the privilege of speaking at the Congressional Briefing on Lung Cancer Stigma presented by the Lung Cancer Caucus and GO2 Foundation for Lung Cancer. It was appropriate for me to share my perspective because I grew up when this stigma did not exist, tobacco use was glamorized and embraced! And then it wasn’t.

The war on smoking

The 1964 proclamation by the Surgeon General that “smoking is hazardous to your health” quickly rallied the troops; government agencies, medical institutions, and well-intended non-profit organizations started a “War on Smoking”. Their primary weapon was fear of lung cancer. We were taught: smoking causes lung cancer, lung cancer will kill you, don’t smoke or quit and you will not die!

In school, we were shown graphic images illustrating the adverse effects of smoking. Then we went home. In 1965 over 40 percent of the adult population used tobacco.1 My parents used tobacco, as did most of their friends and the parents of my friends. We were taught our parents were going to die!

Mysteriously, most of our parents did not develop lung cancer. Statistically, 74 percent of smoking-related deaths are not caused by lung cancer.2 Unfortunately, some parents did develop lung cancer. Back then when someone died of cancer, any cancer, it was seldom mentioned, especially to children. However, once the “War on Smoking” started, if your parents died of lung cancer, you probably knew. Very likely you were told your parents died because they smoked, basically causing their own death. How traumatizing. Society went from embracing tobacco use, to vilifying people who used tobacco, within one generation.

We perpetuate the stigma

I’ve also witnessed my generation vigorously perpetuating stigma, we’ve had fifty years of practice. After learning my diagnosis, a friend revealed her Dad died of lung cancer when she was a teenager. I sensed her pain and anger. I suspect she believes her father killed himself with cigarettes because he could not overcome his addiction. A year or so after this conversation, her older sister, also addicted to nicotine, was diagnosed with lung cancer. The pain and anger re-surfaced. My friend outwardly expressed little compassion for her own sister. How sad for both of them.

During a LCAM event, I met a very nice couple, “fellow” baby boomers. The husband was diagnosed with late-stage disease. During our conversation, his wife loudly proclaimed: “I don’t know what he expected, he smoked for fifty years!” The look of despair and shame on this man’s face was undeniable. How does he cope when his wife-caregiver-support system outwardly blames HIM? He is not only fighting a deadly disease but fighting stigma in his own home. To me this is stigma in its most destructive form.

Everyone is worthy of compassion and hope

The majority of lung cancer patients I know who are diligently fighting this stigma never used tobacco. To me they are the “innocents”, adversely affected by 50 years of the misguided “prevention only” strategy, creating inequitable research funding. However, there is one devastating aspect of this stigma that has not touched them. Their families and friends show unconditional loving support and encouragement. Isn’t everyone diagnosed with a life-threatening disease worthy of compassion and hope?

Which brings me to my confession. When I was first asked “Did you smoke?”, I tried to distance myself from my past tobacco use. I would answer: “Yes, BUT I quit in the 80’s, I was young, started in college and only smoked socially”. I realized my coping strategy was adding to the stigma. I was distancing myself and indirectly blaming lung cancer patients who used tobacco when diagnosed. For this I am deeply sorry. I now respond: “Does it matter?” This statement leads to important discussions.

I’ve learned to handle the insensitive “did you smoke” question. What would tear HOPE from within my soul to fight this devastating disease would be if my loved ones were angry, blaming me for my diagnosis. This is a reality in far too many homes, created by stigma. I’ve learned ending the stigma has to start with me. As a community, let’s make sure we always stand up for EVERYONE diagnosed with lung cancer!