I was diagnosed seven years ago, on December 26, 2013. In past years, I have celebrated my cancerversary with my family by taking trips to warm places during the last week of the year.

Due to COVID-19, our celebration had to be a little different this year — just a day trip to Lake Geneva, Wisconsin, a little over an hour away from home. Still, it was important to me to mark the anniversary of my diagnosis in a special way. 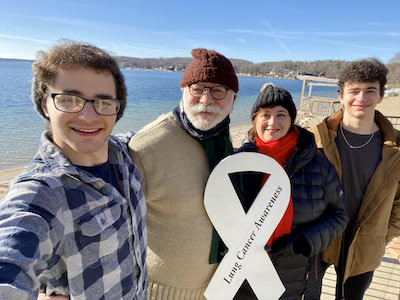 A major milestone for me

Reaching seven years is a major milestone for me. When I was told that I had stage IV lung cancer by the orthopedic oncologist I was seeing for a mass in my elbow, all I knew about lung cancer was the dismal survival rates. A few days earlier, the results of a biopsy of my elbow mass had unexpectedly come back as malignant adenocarcinoma, a type of cancer that doesn’t originate in the bone. When I had asked the orthopedic oncologist where the adenocarcinoma could have originated, he told me that it could have spread from my breast or lungs. Initially, I thought I had breast cancer.

Remembering back to my diagnosis day

On the day of my diagnosis, I went to the hospital with my husband for a PET scan to find out the location of the original tumor. When confirming my name and date of birth, the PET scan technician also mentioned that the test was for “suspected lung cancer,” not breast cancer. That was the first inkling I had of what was coming, and I googled lung cancer statistics while choking down some lunch and waiting for my appointment with the orthopedic oncologist to review the results of the PET scan.

The wait seemed to last forever. Since it was December 26th, a lot of hospital staff were on vacation, but since cancer doesn’t pause for a holiday, there were still plenty of patients. I remember being told that my husband and I were going to be brought into an “overflow” room to wait. This room looked more like a conference room than an examination room; there was a couch, a phone, and a large box of tissues. This “overflow” room definitely didn’t look like a place where people went to hear good news.

A chance I could make it to seven years...

After about an hour, the orthopedic oncologist joined us in this room and as I had pretty much expected by then, informed us of my stage IV lung cancer diagnosis. He told me that he had been trying to get someone from the thoracic oncology department in the hospital to speak with me, but no one was available. I recall telling him about the dismal survival statistics I had googled and asking him if there was a chance I could make it to five years. He said yes.

I then questioned him about ten years and he said that was much more doubtful. In a somewhat crazed and nonsensical fashion, I remember negotiating with him until he said that there was a chance I could make it to seven years, but not likely much more.

Here’s to no maximum!

Even though I later recognized that this physician probably didn’t even know what type of lung cancer I had and the potential treatment options, this seven year time limit has always stuck in my head and become a major milestone. While this is actually the first time I’ve written about the seven year maximum, I’ve always had it in the back of my mind that it would be a miracle if I survived for seven years post-diagnosis.

Well, I am very happy and grateful to announce that I have made it past the “maximum” and know others who have been living with lung cancer for much longer than myself. Here’s to no maximum!

Don’t Forget About Your Colon!

Do You Still Get Nervous Before Every Scan?

18 comments
This article represents the opinions, thoughts, and experiences of the author; none of this content has been paid for by any advertiser. The LungCancer.net team does not recommend or endorse any products or treatments discussed herein. Learn more about how we maintain editorial integrity here.

Which do you most want to learn more about on LungCancer.net?