When Terri Conneran was first diagnosed with lung cancer, she focused on kicking cancer’s ass.

That was before discovering she had the KRAS (pronounced KAY-ras) biomarker.

It began with having trouble breathing

It all started in 2017, when she began having trouble breathing. Lung cancer was not on her radar.

“I had asthma for a number of years,” she says. A difficult summer turned into a challenging autumn, then winter—with no relief. “We blamed allergies and changed medications, but nothing really seemed to help. It became harder and harder to breathe. By Christmas, I just felt lousy. My husband finally said, ‘Enough is enough.’ So, I went to the doctor expecting to get an antibiotic for an upper respiratory or sinus infection.” 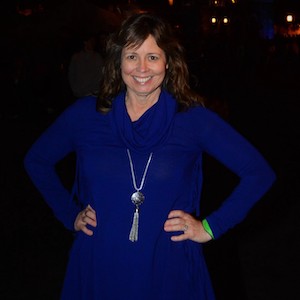 However, when the doctor heard fluid in Terri’s lungs, she ordered imaging and discovered a mass. A biopsy ultimately confirmed she had non-small cell lung cancer. The very next morning, Terri experienced what felt like a heart attack. She reasoned within herself and attributed the classic warning signs as stress brought on by the shock of her cancer diagnosis.

“What happened was, after the biopsy, my lung had filled up with fluid and collapsed,” she explains.

They kept Terri in the hospital to drain the fluid around her lung and stage her cancer. She was initially diagnosed at Stage III. Her care team planned to start her on chemotherapy, then surgically remove one lobe of her left lung.

“After my diagnosis, the only thing my doctor showed me in my report was PDL1. Because I had become involved with the lung cancer community, lung cancer support group and on the LiveLung board, I was aware and knew enough to ask about my biomarkers.”

However, at the time, her oncologist told Terri she had no “actionable” biomarker.

After completing her treatment, doctors said she had No Evidence of Disease (NED). She decided to seek a second opinion.

“At my second opinion visit, I made a comment about not having a mutation. But that doctor said, ‘You do have a mutation. You have KRAS.’”

Immediately, Terri started researching about KRAS and tried reaching out to the KRAS community.

“I went looking for my KRAS people -- the same way there are EGFR and ALK communities. I wondered: Where are my people?”

Creating a KRAS group from scratch

But she soon discovered that -- even though KRAS is the most common biomarker in lung cancer -- there was no formal KRAS community. That is when she decided to create KRAS Kickers, where researchers, patients, and caregivers can come together. 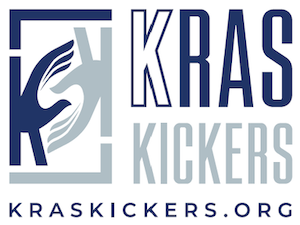 “We bring researchers and patients together to share information and hope. As patients, we need that. We are bringing together these groups to share hope, research, and knowledge.”

KRAS Kickers has an active Facebook group and is expanding its website. In its first few months of operation, KRAS Kickers came under LiveLung’s 501(c)(3) nonprofit umbrella. However, the organization is growing so quickly that KRAS Kickers has now applied for its own nonprofit status.

Does Advice to "Stay Positive" Help?

6 comments
This article represents the opinions, thoughts, and experiences of the author; none of this content has been paid for by any advertiser. The LungCancer.net team does not recommend or endorse any products or treatments discussed herein. Learn more about how we maintain editorial integrity here.

Which do you most want to learn more about on LungCancer.net?