My husband and I just returned from the first real vacation we’ve taken since the pandemic began in March 2020. We travelled to Utah for a week and spent some time in Salt Lake City, Park City, and Moab. Originally, we had planned a trip to Finland for our 25th wedding anniversary; unfortunately, we had to cancel that trip last year due to COVID concerns. Our belated celebration evolved into this 26th anniversary trip to a domestic, rather than international, location. 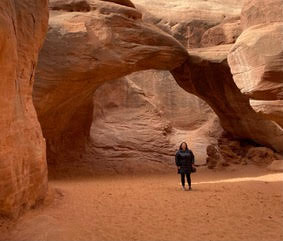 Although we were initially a bit disappointed that we didn’t feel comfortable visiting our originally planned destination, we found the mountains and geological formations that we saw on our Utah travels absolutely breathtaking! Below is a picture I took in front of one of many beautiful viewpoints at Arches National Park in Moab, Utah.

What does "breathtaking" mean?

Throughout the week, my husband and I kept using the phrase “breathtaking” to describe the sights we were experiencing. I started to think about the meaning of this commonly-used word. According to the Merriam-Webster dictionary, “breathtaking” has two meanings. The first one is “causing one to breathe rapidly or with difficulty: making one out of breath.” The second definition is “exciting, thrilling, very great: astonishing.”1

I found these dual definitions very interesting and pertinent! When using “breathtaking” to comment on the sights, I was referring to the second definition of the word. However, the first definition was also true in my situation. As someone living with lung cancer and missing a good portion of my right lung, I spent some time dealing with shortness of breath as well.

Elevation change can be challenging

In order to visit many of the rock formations in Arches and Canyonlands National Parks and even tour Main Street in Park City, I found myself subjected to significant increases in elevation. While my hometown of Chicago lies on a plain a mere 595 feet above sea level, Park City’s elevation is 7,000 feet and Moab’s is approximately 4,000 feet. Hiking in the Moab national parks took me to additional heights that may have reached 6,000 feet above sea level.

While I wasn’t too impacted when walking on flat surfaces, any time I needed to go up an incline I ended up getting out of breath. I found myself needing to stop frequently and rest while others passed me. This was a new and unwelcome experience for me. I have traveled at high altitudes previously without major effects, but this trip was my first time in the mountains since my lobectomy in 2020. Walking in the relatively flat neighborhoods near my home or even using the incline mode on the treadmill didn’t prepare me for this adventure!

Why was this the case? At higher altitudes, the air is “thinner” which means it has less oxygen and lower pressure. As a result, your body has to breathe more to get the oxygen it needs, leading to shortness of breath. This is compounded by the fact that the lower air pressure makes it more difficult to pull air into your lungs.2 People like myself who are living with lung tissue loss or damage from lung cancer treatments can feel this effect more severely.

It’s important to note that the type of breathlessness I am describing is different from true altitude sickness, which usually only occurs at heights of over 8,000 feet and can have dangerous and debilitating side effects. The shortness of breath I experienced on my trip was much less significant or worrisome, although still somewhat annoying. I handled my difficulties when hiking by resting frequently and drinking a lot of water. At higher altitudes, “the lower oxygen levels...make you breathe in and out faster and more deeply, so you lose more water through respiration.”3 That explains why I felt better with increased water consumption.

I hope that by sharing my experience, those of you anticipating mountain vacations and/or hiking feel a little better prepared for what you might experience. There are a lot of beautiful, breathtaking places out there in nature — go out and see them even if you need to go more slowly than usual as I did!

Does Advice to "Stay Positive" Help?

Should I Be Happy if I Have Stable Disease?

13 comments
This article represents the opinions, thoughts, and experiences of the author; none of this content has been paid for by any advertiser. The LungCancer.net team does not recommend or endorse any products or treatments discussed herein. Learn more about how we maintain editorial integrity here.