Taking a Little Break from Cancer with Other Cancer Survivors

Have you ever visited a Cancer Support Communities (CSC) clubhouse? Every time I go, I think I will be more active. I went yesterday and once more, I am vowing to go more often.

No one faces cancer alone

You may know CSC as Gilda's Club, named after the famed comedian, Gilda Radner, who passed away from ovarian cancer in 1989. Regardless of the name your center goes by, its mission is to ensure that "no one faces cancer alone."

CSC caters to the cancer patient, his or her family, and even friends of the patient. Anyone whose lives are touched by cancer is welcome to join the club and participate in the numerous activities that are available. The activity that usually draws me in is art class.

I am no artist, to say the least. But, I have so much fun when I attend the classes. I did a somewhat abstract painting of a Christmas tree in December. My son took it home and hung it on his refrigerator. Mom art. 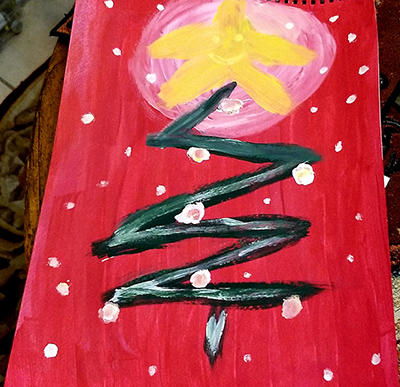 How are you really doing?

I read somewhere recently that when cancer patients ask one another, "How are you doing?" it is an honest question for which we want an actual response. A glib "Fine" will likely be met with, "No, how are you really doing?" We want to know - are you still NED, are your drugs working, what kind of side effects are you having, what is actually going on with you in your cancer journey?

That was true yesterday. When I arrived, I was delighted to see a friend who has been fighting stage 4 melanoma for years. I had feared that she might no longer be able to come. I told her how happy I was to see her and asked how she was doing. Unfortunately, she's not doing well. She's just been turned down for three clinical trials, there are few if any options, and she told me, "Donna, I'm just tired."

It probably sounds like we were starting our visit on a down note, but the reality is that as soon as it was time for art class to begin, we took our seats and prepared to paint. I was struck by the fact that if anyone had walked into the room during the two hours that we were painting they would have had no clue that we were a group of women mostly facing late-stage cancer.

Putting cancer on hold for a little

Once we began painting, our concentration was on nothing except painting. The clubhouse had brought in a young woman who works professionally at Painting with a Twist to teach us. She was accustomed to working with people who are not artists by trade (or skill). She took us step by step through the process of creating a canvas of flowers and hope. 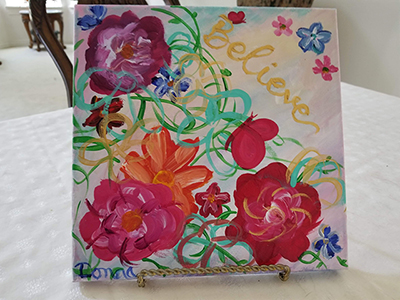 There was much laughter, a great deal of encouragement, and palpable joy at the long table. None of us were particularly skilled at what we were doing, but all of us left after two hours with a painting worthy of keeping. But, we left with much more than that.

We had two-plus hours where cancer was not in the forefront of anyone's mind. Our focus was directed completely away from the disease. Even my friend who is facing some really, really tough decisions in upcoming days about whether to continue treatments or not felt uplifted and renewed.

There are CSC clubhouses located all across the United States. If you have time and would like a bit of a break from cancer, I strongly encourage you to join your local group. I think you'll be glad you did.

Resilience from Living with Lung Cancer

My Secrets to Living with Lung Cancer

19 comments
This article represents the opinions, thoughts, and experiences of the author; none of this content has been paid for by any advertiser. The LungCancer.net team does not recommend or endorse any products or treatments discussed herein. Learn more about how we maintain editorial integrity here.