Basic Facts About the Lungs

If you are like most people, you didn’t give much thought to your lungs until you were diagnosed with lung cancer. I know I certainly didn’t! I knew that my lungs allowed me to breathe, but I didn’t really possess detailed information about their anatomy, how the breathing process works, and other important information. My high school biology class was many years ago, and unfortunately, a lot of the knowledge I gained than was lost over time.

I did some research and I hope that you will find the basic lung information that I share in this article helpful. To start off, you have two lungs, one on the right and one on the left side of your chest. Your chest is also called your “thorax” which is why you will hear oncologists who specialize in lung cancer being referred to as “thoracic oncologists.” Your lungs are considered the major organs of the respiratory system and are divided into sections called “lobes.” Your right lung has three lobes, but your left lung is slightly smaller and only has two lobes in order to accommodate your heart.

How do the lungs help you breathe?

The main role of the lungs is to take oxygen that you inhale through your mouth and nose and pass it into your bloodstream so that it can be circulated throughout your body. The lungs also work to remove carbon dioxide from your bloodstream and send this gas and others back into the atmosphere when you exhale. The “diaphragm,” a muscle that sits underneath the lungs, helps the lungs breathe by contracting to make room for inhalations and then relaxing so that exhalations can be pushed out into the environment.

In between the lungs, there is an area called the “mediastinum.” This area, which separates the lungs, contains the heart, trachea, esophagus, and many lymph nodes. The lungs themselves are not part of the mediastinum. Instead, the lungs are located outside the mediastinum and are protected by the “pleura,” which is a double-layer membrane that covers each lung. The inner layer of the pleura is adjacent to the lung, while the outer layer of the pleura lines the chest wall and diaphragm. A bit of “pleural fluid” is always present between the two layers so that they can move smoothly against each other as the lungs inflate and deflate with air. When extra fluid accumulates in this area, it is called a “pleural effusion.” A pleural effusion can be caused by cancer, but it can also be the result of inflammation, infection, and other causes.

The “trachea,” also known as your windpipe, serves as a passageway for air between your mouth and your nose, and your lungs. The “larynx,” which contains your vocal cords and is often known as your voice box, is located at the very beginning of the trachea. The larynx makes sure air passes smoothly into the trachea and prevents other foreign particles from entering your lungs. If foreign particles try to enter, sensors in your larynx will cause you to cough, expelling these particles. When you swallow food that you eat, a special flap called the “epiglottis” closes over the larynx to protect the airways, sending food down your esophagus instead of your trachea. In this way, your lungs are protected.

The trachea works with the larynx to keep the lungs safe. It is lined with a mucous membrane to trap particles that could hurt the lungs and also contains tiny hair-like structures called “cilia” that help push mucous with any foreign participles out of the trachea. The trachea divides into two branches called “bronchi”; one enters the right lung and the other enters the left lung. Each bronchus splits into smaller branches called “bronchioles” and eventually into “alveoli” which are tiny air sacs. The alveoli actually do the work of the lungs in exchanging oxygen and carbon dioxide. 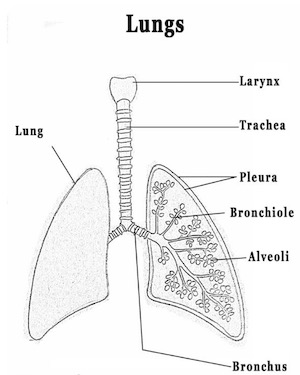 I have included a very basic picture below covering some of the terminology I mentioned. For more details, please check out some of the sources I’ve listed as well in the references.1-3

It's About the Journey

Not all EGFR Mutations Are the Same

1 comments
This article represents the opinions, thoughts, and experiences of the author; none of this content has been paid for by any advertiser. The LungCancer.net team does not recommend or endorse any products or treatments discussed herein. Learn more about how we maintain editorial integrity here.