From March 29th through April 3rd of this year, I had the good fortune of being selected to participate in the Scientist-Survivor (SSP) Program at AACR’s Annual Meeting. AACR stands for the American Association for Cancer Research and its Annual Meeting is attended by over 20,000 cancer researchers and other medical professionals from all over the world. The location for the AACR Annual Meeting changes each year; this time it took place in Atlanta, Georgia. 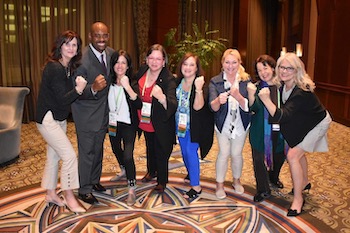 This was the 2nd time I was part of the SSP program at an AACR Annual Meeting. My first time was in 2017 in Washington, DC and at that time, I was the only lung cancer advocate to participate. This year, I was pleased to see our numbers increased and participated along with my friends and fellow advocates/survivors Jill Feldman and Jill Hamer-Wilson. Other incredible lung cancer advocates attended AACR as well and we were proud to have quite a crew, including Chris Draft!

As part of SSP, advocates are assigned to small working groups for the duration of the AACR meeting. I was part of an awesome working group with advocates from the United States, Canada, and Africa including brain cancer, breast cancer, ovarian cancer, and pediatric cancer advocates. It was a great opportunity to learn from others! All working groups are assigned an important cancer question to investigate during the AACR meeting with the guidance of a scientific mentor and an advocate mentor. My group’s question involved genomics and precision medicine and by the end of the meeting, I understood the difference between the genome, epigenome, transcriptome, and proteome. Stay tuned for a future article about this!

The SSP program gives much-needed structure to advocates who are often attending AACR for the first time. There is an opening SSP session the afternoon before the start of AACR, which covers important information about the meeting and about cancer research as a whole. There are also special sessions and receptions for SSP advocates to attend while at the meeting, some optional and some required. These range from private meetings with FDA leadership to small group sessions just for SSP with some of the presenting scientists at AACR. These are fantastic opportunities to get questions answered, network, and learn! The SSP program concludes at a dinner at the end of the last full day of the AACR conference with presentations from all the working groups and a “graduation” ceremony!

Participants in SSP also present advocacy posters and have time to attend regular AACR sessions, both those related to their working group questions and their personal interests. It’s an incredibly busy but fantastic experience. As a second time advocate, I feel that I was better at balancing my time between all the competing demands than I did the first time I participated in the program. I was also able to help some of my fellow working group members, most of whom were first time participants.

How can you get involved?

In addition to the Annual Meeting, AACR also runs the SSP program at their Conference on the Science of Cancer Health Disparities in Racial/Ethnic Minorities and the Medically Underserved. Check out AARS's website for more information about participating in the SSP Program.

What Should I Look for in an Oncologist?

3 comments
This article represents the opinions, thoughts, and experiences of the author; none of this content has been paid for by any advertiser. The LungCancer.net team does not recommend or endorse any products or treatments discussed herein. Learn more about how we maintain editorial integrity here.

Have you experienced insurance obstacles in your lung cancer journey?